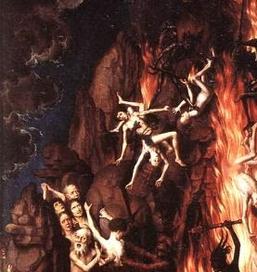 he accidentally overdosed on a drug called Valium.

“Like the bible says you are in torment,” says Carl.

draw pictures of what he says he encountered in hell.

Carl remembers as he shows drawings, “The one in the middle is trying to get

out of the fire but there’s no way they can get out. There’s no hope for them.

There’s no way of escape for them.”

Carl grew up in a Christian home where he had been taught that heaven and hell were real places. Even as a child, he was sensitive to the things of God.

“I always felt the presence of God. I’ve seen angels of God at a young age and that let me know that God was with me.”

After high school, Carl joined the army and married. Both his marriage and his military career were short lived.

Carl says, “Platoon leader meaning Platoon sergeant and squad leader would come to me and say, ’You’re not doing your job and you should be doing better than this. And you’re not going to ever make the next rank. And you know your career is going to end.’ So I got really frustrated.”

Carl decided it was time to get out of the army – by going AWOL. He hitch hiked to Ohio to see an old friend. He then went on a two-week drug binge. One night Carl went to a crack house in the worst part of Columbus, Ohio.

Carl smoked some crack and started drinking alcohol and using other drugs. But he says he believes it was the last pill he took that sent him on a journey to hell.

Carl remembers, “And I took that Valium and before I knew it I fell off the couch onto the floor. It was pitch black dark. I began to quiver. I began to have the shakes. And I began going down and down and down like a deep pit and I start smelling the stench of hell. It’s the most rottenness thing that you could ever smell in your life. In fact, you can’t even imagine it. I began to fill a tugging and pulling like the bible says the demons tug and nag at you. They were calling my name. ‘We got you. We got you. We got you. You belong to us now.’ I saw souls. Lost souls that were in torment in the lake of fire. They were crying and calling on God. They were hopeless. And I called on the Lord, ‘Jesus. Jesus. Help me Jesus. Help me Jesus.’ And soon as I called on his name. I saw the hand of God snatch me out of hell and my spirit went back into my body.”

Carl says that he was in hell for more than half an hour.

“I was shaking and trembling and I turned my head to the right and they said I was dead. And they said it was 30 to 35 minutes but I know that was a loving God that loved me so much.”

Three days later, Carl returned to Ft. Eustis, Virginia to face the consequences of going AWOL. He was demoted and was confined to the barracks for one month. During that time alone he completely surrendered his life to Jesus Christ.

“I immediately asked the Lord to forgive me and I repented and put those sins behind me. I went forward in God. I really gave my life back to Christ after that,” says Carl.

Today Carl is married again. He’s on a mission: to tell as many people as he can about the reality of heaven and hell.

“God loved me so much that he gave me a second chance.  And I’m here to tell the story not a story but a true testimony of how awesome God is if people will only listen. And don’t take God for granted. Don’t throw your life away. Accept Jesus as your savior. “

​Written by Michelle Wilson from the 700 club.
​