motorcycle under the influence and got into a traffic accident.  I then went to

prison.  My wife asked for a divorce when I was released from prison.  I set

up a thorough plan to kill eight people: my wife, her family–even child

relatives–who encouraged her to get the divorce.  The last thing I did before

executing this plan was to meet my mother in GwangJoo, then I booked a

While I was at my mother's house, I heard a resonant voice that I've never

heard before 40 minutes prior to getting on the train.  It was so loud and

thunderous of a sound that it almost split my ear. "Look! Look!" it said.  Feeling too strange, I went out the front door and looked around, but there was no one.  Second-guessing myself, I returned to the bedroom and I was about to light a smoke. Suddenly, the room became bright.  I was surprised and looked at the bedroom door in the confusion of the moment.  At that instant, I yelled in shock.

While a clear rainbow light was flowing down, there was something walking down in the light. Looking over it, it was a person who wore white clothing.  Due to the bright light, I couldn't see its face clearly, but it was human-like.  After a while, a rectangular horse-drawn carriage was following behind him.

There were three seats on the carriage. The center one was empty and two people wearing white clothing sat on the both sides.  If someone who believes in Jesus saw the scene, he would have been touched greatly. But I was just stunned because I was just atheist man.  A strange point I should add is that I felt my burning hatred disappearing.

I woke up my mother who was sleeping by me.  But she didn't seem to see the scene and she ignored me, saying "Don't be ridiculous!" then went to sleep again.  When I looked back at the carriage again, I was startled.  A person who looked like me was sitting on the center seat which was previously empty.  I touched him to make sure he was real.  It was like I was looking at a mirror.

As soon as I sat down on the seat, the carriage took off. After that, I got to clearly witness heaven and hell.  After passing by a dazzling and brilliant golden road, I passed by a place where people like me were walking along a flower garden road, smelling the flowers.  I was able to see people came from all over the world.

I clearly saw my uncle's face on my mother's side who had been a Christian and died of a disease. However, I couldn't find any disease marks on him.  His appearance looked like a youthful 30-something with a young face and body, similar to how I saw him when I was in 3rd~4th grade in elementary school.  Peace and happiness, absent of any anxieties and concerns of the world, was apparent on his face.  Hearing a continuous booming musical sound, the golden carriage was passing by brilliant golden houses after driving for several days.  When we arrived here, the angles who wouldn't answer whatever I asked eventually said "Here is heaven," with a clear voice.

There were an uncountable number of houses which were stretched out into horizon.  A common point that I felt from those brilliant golden houses that I've never seen on earth was that all of them were neatly organized and looked ready and waiting for an owner to move in.  Unlike where my uncle was, I was unable to see anyone here.  I asked the angels about it, but they didn't answer me.

The carriage was suddenly entering a dark place, as if it were night.  The only source of illumination was a bright light the size of the full moon.  It was in the shape of people wearing white clothing like those who drove the carriage.  The music I heard before had already stopped. Fear entered my mind before I was aware of it.  I was scared, thinking "Now that they've showed me the most beautiful things that I'll never see on earth, are they going to kill me?"

A light human-like shape was illuminating a person before I was aware of it. I got to witness my father there who had died 6 years ago.  He was the breadwinner and took care of family matters.  He successively held the position of a Confucian scholar principal.  While he was alive, he issued an impetuous order for people to stop talking to him when he heard them say the "J" of Jesus.  When this man was on his deathbed, he became miserable and his body swelled so much it could burst. Now before me I saw my father suffering from pains as if he was approaching death again.

Blue venomous serpents with triangular heads, enough to hide his ankles, were bloodying my father's body, crawling, wrapping around him and biting him all over.  I was crying in despondency and calling out to him, but he didn't seem to hear me at all.

The second place I went to, a large number of people were gathered in a crowd trying to escape from a fire on an extremely huge iron plate similar to a grill.  Simply, it was pandemonium.  I met another acquaintance here.  He was my father's older brother, who having lived like a miser, said that money was everything.  He was not able to hear to my voice either.

At the place spotlighted by the third light, I witnessed a friend who had died in a traffic accident. Three dreadful yellowish brown serpents were squeezing him so strongly, wrapping coils around him. Thus, his face was turning pale.  This friend has also loved drinking like me, but he was eventually the one who was dead due to alcohol.

At the place spotlighted by the forth light, I was able to see people who were immersed up to the waist in the deep swamp.  Unknown small black beasts were making him bloody, biting and clawing him all over.  I was able to recognize two people, a relative and a childhood friend among people who were inevitably suffering trying escaping the beasts, rolling their bodies left and right.  I didn't know it at the time, but I found out that the relative had been going to church simply because they heard that attending church cured disease; they had no true faith.  He wasted his time attending church half-heartedly, having one foot in church and the other foot in the world.

As I have recounted, the hell I saw was an unimaginable, atrocious place.  I clearly saw my father, uncle, friend and relative in the dark and wretched place. There was nothing I could do but cry at them in tears.  I, someone who thought everything ends after death, faced the truth.  After witnessing hell, the carriage stopped at a place called the judgment platform (Revelation 20:13).  Here, I saw something called reminiscence where all of my sins that I committed with my eyes, hands, feet and even mind since birth were recorded.

I was not able to count the number of my sins that I committed during my life because it was categorized into 132 categories, and each category had sub-categories.  Among them, I got to see that the largest number of sins branched off of actions that I made due to drinking.   Another thing I found out is that there were two items that are not sins in the real world, but sins in heaven.  One is not to believe in Jesus and the other one is to curse at or be contemptuous with others who believe in Jesus.

​All of my past sins were recorded–even with the date and time–such as not attending church, tearing and throwing Bibles and hymnbooks into a fire, cursing, being disrespectful, getting stringent with evangelical friends, even slapping their faces and kicking them.  I asked a question that I was wondering all the time here.  "Why do you show these places to me, someone who hated Jesus exceptionally and committed all kinds of sins, rather than to someone like my brother who went through fire and water to believe in Jesus?"  An angel beside me gave me an answer.  "It's not necessary for people like your brother to come here.  Someone like you will not be able to witness to others about heaven and hell until they see it with their own eyes."

That was it. It was an answer corresponding to the Bible verse which states that someone like my brother who can believe without seeing will be blessed more. Soon afterward, the carriage began to move again. Suddenly, I heard a loud and sonorous voice ask pressingly "Will you believe?"

This voice was the same one that I heard before leaving for Seoul in order to kill those eight people.

Even though I've never accepted God as my Heavenly Father before that time, I was willing to receive God, naturally answering "Lord! I believe in you."  God continued to say, "When you go back to the world, testify about heaven and the hell to others.  Don't add or take anything away from what you saw."  When departing, the last thing He said was, "I will keep watching over you."

​I felt like I had been on a long journey for many days, but it was just 11:10 pm when I woke up, feeling scared.  This all occurred in the space of 70 minutes.  There was no concept of earthly time there.   Coming to my senses, my mother was staring at me with an intense face.  She said I was mumbling unknown words to myself and I wouldn't wake up even though she tried to wake me up. Right after that, I told her exactly what I had just seen.  My mother, who has always shouted out whenever she heard just the "J" of Jesus, came to tears after hearing of the story of how her husband suffered.  Just like that, my mother and I became disciples of Jesus and took baptismal education, then became involved in church the same day.  She became a passionate person who enthusiastically attends church as much as I do.

At this moment, my life changed 180 degrees. I became a person whose lips naturally speak words only giving glory to Lord Jesus rather than to myself.  I was able to become and continue to be a missionary doing the Lord's work.  The last order that God gave me which is always present in my mind, "I will keep watching over you," is what brought me here. 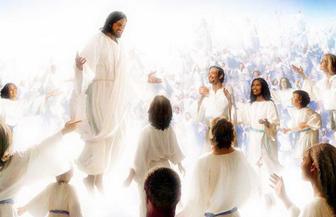