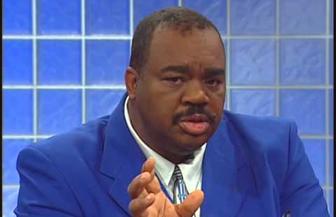 Kelley. Curtis’ father was violently abusive, an alcoholic, and

experienced in voodoo, obeya, and hoodoo.  His mother is a devout

As a young child, Curtis was beaten by his father.  His older brothers

were drug dealers, so drugs were always accessible to Curtis, even

at the age of four.  That’s not the only thing Curtis was exposed to as

child.  When he was five, he witnessed his voodoo practicing

grandmother cast a spell on a man and he fell over.  Seeing this

made him want to have the same power.

Curtis imitated the words he heard his grandmother say and immediately he felt a dark presence swirl around and enter him.  From then on he started practicing voodoo.  One day his father and a voodoo witch were going to take Curtis out of the country and bring him to Haiti.  As the seventh child in his family he was chosen to learn voodoo under the then Haitian president Francois “Papa Doc” Duvalier.  Curtis wanted to go because he was excited to gain money, power, and control.

As they were sneaking Curtis out of the apartment that morning Curtis’ mother intercepted them.  She told them they could not take Curtis away.  The women each grabbed one of Curtis’ arms and started tugging at him.  Somehow, Curtis’ mother lost her grasp on him and the trio started to run for the back door.  Before they made it out of the door, Curtis’ father and the witch ran away.  Curtis believes that they saw something large, probably an angel that scared them off as a result of his mother’s prayers.

TO HELL AND BACK

Curtis smoked marijuana at age four and by age ten he was using cocaine.  He learned to deal drugs and make a lot of money by age eleven.  Curtis became a streetfighter and was deeply involved in voodoo, which he says came through his father’s Haitian ancestry.

Curtis would cast spells and put curses on people.  His mother, who was raised in the Church of God in Christ, would constantly pray for the salvation of her family and planned a getaway.  One day while his father was away, they rented a U-Haul, emptied the entire apartment, and fled to Milwaukee.

Curtis was free from his father’s abuse, but still in bondage to drugs.  In 1971 at age fifteen, at the influence of demonic spirits, he overdosed on large quantities of cocaine, pills, and marijuana.  Then his brothers took him to a bar where he had beer.  The beer offset the other drugs he took.  In the bar he saw sixty hooded creatures.  They came up around him and grabbed him.  He shook them off, but they came back.

Curtis exclaimed to his brothers, “Take me home!”  He wanted to go home because he knew that his mother could pray away the things that were tormenting him.  Curtis saw the ground open up around him as countless spirits announced, “We’ve come to take you away.”  His brothers took him to a car to go home.  On the way home, Curtis died.

Curtis felt these same spirits that were influencing him grab him by the mouth, yank him out of his body, and pull him down into a dark, reddish pit.  He heard screams.  There were snakes, demons, and every foul thing imaginable.   It had a terrible euphoric smell.  It was very lonely, isolated, and full of endless torment.  These spirits were tormenting him.  They were hitting him, pulling at him, etc. non stop.  He was being hit in the head and it felt like a sledgehammer.

Curtis heard laughing and voices saying, “We used you and set you up!”  The spirits let go of him and “let” him run.  Curtis was screaming.  He ran to what he thought was the end.  He heard a horrible cello music sound.  Then the evil spirits pulled him back and tormented him some more.  Then he relaxed.  He thought about what he had done and stopped struggling.  Then the torment seemed like he was in a blender non stop.

Curtis was swarmed by thousands of spirits, like a beetle in an ant hole.  After this, the spirits looked up in unison.  The whole place was illuminated with a Great Light.  Curtis saw two hands come down, grab him by his shoulders, and pull him up out of the pit.  The evil spirits were still trying to hold on to him and were saying, “No!  He belongs to us!”  The hands gently pulled him out and put him back into his body.  Then he heard a voice say, “Because of your mother’s prayers and because you were chosen to do a work for us you were saved.”

Curtis believes the voice was God. He came back.  He couldn’t see or walk, and as his brothers dragged him to the stairs, he blacked out.  Curtis woke up in a mental hospital.  Along with certain body functions he lost his memory.  His sister, who had since become a Christian, constantly invited him to participate in a week of revival services at church.  The first night was “good,” he said, but it wasn’t until the third evening that the pastor singled Curtis out and asked him to come forward.

As Curtis walked to the front on his own, he heard a voice say, “I love you.”  “It was like a tank fell off my shoulders,” he says.  He saw a vision of himself helping people, instead of dragging them down into the evil world of drugs and the occult.  At that point he accepted Christ and the Holy Spirit into his life.


Now Curtis ministers worldwide-China, London, Pakistan, Haiti, and resides with his wife Selena Kelley in Little Rock, near Mojave, California. He also distributes food and clothing to people within the community, and develops relationships with at risk young people.  Curtis continues to offer his message of hope to troubled youth.